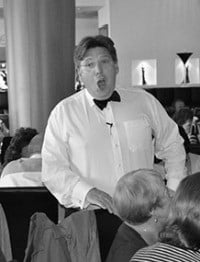 Michael has also made many surprise appearances at events as part of the Surprise-Singers.