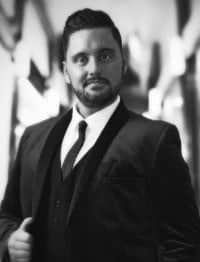 Kieran is one of the most sought after tenors Internationally and in the UK today, his voice is so versatile he switches effortlessly between opera, musical theatre to swing and pop styles.  His emotion and expression through song really make him one of the greatest classical crossover voices in the UK. Kieran trained in musical theatre at one of London’s top musical theatre Schools  – Mountview Academy Of Theatre Arts,  finishing with a BA hons degree in musical theatre performance.

Whilst in training he managed to win The BBC award scholarship for his powerful vocals. Since leaving college he has appeared in many musicals such as Oliver, Sweeney Todd, Wizard Of Oz, Candide to name a few. He has also appeared in concert in London’s West End.

A performance highlight was when he appeared as a Britain’s Got Talent finalist. He has had the pleasure of singing for royalty –  he performed for the king and queen of Morocco at their request. He has sang for Hollywood A list superstars and even sang along side commercial platinum selling pop Groups ‘B*Witched & ‘S Club 7’. He now not only works as a Surprise Singer he performs alongside Luke one of our other Surprise singers performing a tribute to Alfie Boe and Michael Ball a fantastic and well received show on ships and land.