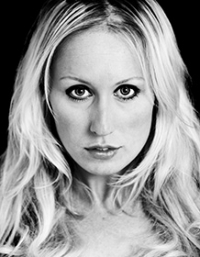 Trained at the North London Dance Studio and then went on to complete a BA Hons in Performing Arts at Hertfordshire University. She often appears around the country in Victorian Music Hall, this included at the The Players’ Theatre, London and City Varieties, Leeds. She has appeared in several pantomimes including Dick Whittington (Norwich Theatre Royal), Aladdin (The Players’ Theatre), Snow White (Epsom Playhouse), Aladdin (The Garrick, Lichfield), Beauty and the Beast (The Broadway, Peterborough).

Georgina has also spent time on board the P&O cruise ship Oriana, during which time she appeared in a variety of cabaret shows and musicals. Other musical credits include Grease, A Chorus Line, FAME, Fiddler on the Roof.

Georgina was part of the Brick Lane Music Hall resident company, performing in a variety of musical shows. A great deal of the last couple of years she has travelled around the UK with the No. 1 National Tour of Annie.

Most recently Georgina has begun a new venture bringing music to children in Nursery schools around the country, and again appearing with her sister Tiffany in the stage version of this show The Tiny Mites At The Seaside.

Born into a very musical family, and having been lucky enough to have appeared on stage with her parents and sister, she is very happy to be continuing her family’s tradition!!